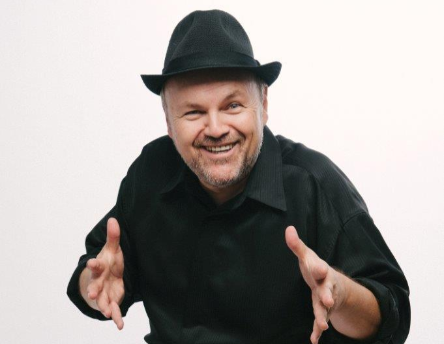 Victor J., also known to his parents and friends as Victor J Hanson, was born and raised in Toronto, Ontario, Canada. (The Jane-Finch area to be exact.) As Victor says: “Living in this part of Toronto, you either grew up as a tough fighter or someone that could joke their way out of a fight... I’m still a lousy fighter.”

Victor started out as a serious guitarist... serious?, yea right! Always finding more satisfaction in making the audience laugh as opposed to putting a serious song across. He started playing lead guitar in a band that performed in the Country Music scene, opening shows for Country Music acts such as Tim Taylor & Anita Perras, The Family Brown, Marty Robbins, & The Oak Ridge Boys... Adding humour to every show, much to the chagrin of other band members.

After a couple years on the road he decided to hone his comedy further. He came back to Toronto, & sold his 1976 Malibu to help pay for acting lessons that included The Second City Improv. Always using his musical talent to enhance his comedy, Victor formed his Musical Comedy duo Men Without Hairs, (with a CD release appropriately called “Laugh”. Victor says it’s a million seller... “Yea, I got a million in my cellar!”), and later, another duo, this time of hilarious Comedic Improv proportions called, The Pudgy Boys! Both acts have performed across Canada & the U.S. including Caesar's Palace, in Las Vegas. (Victor, how do you come up with the names for your acts?...“Simple, I just look into the mirror.”)

The drivers and staff at our Safety Banquet in Brampton enjoyed the show put on by Victor.. He spent time to get to learn our business and was able to tailor his show to our group.. Lots of laughs.. Very well done.. Thanks again for making our awards night fun! - TransX Group of Companies

Victor was very funny, and he really incorporated our people and our company into his act. Everyone enjoyed the show, and I slept soundly last night. - Del Property Management Inc. (Tridel)

The comments on Victor were absolutely over the top. He kept the audience in stitches the whole evening, worked a number of people in the audience into his routine and had everyone laughing with them as opposed to at them. We have never had such positive feedback before. He did an absolutely fabulous job. Thanks for letting us know about him. - OMAA

The feedback has been overwhelmingly positive! Everyone thought Victor was excellent and many wanted to see him do more impersonations......He was very quick to pick up on Hasbro and get the audience involved. Thanks again for the recommendation. - Hasbro

I was impressed with the way Victor improvised when receiving small pieces of information from the guests. He was well prepared and it was obvious he'd researched the company he was performing for...he did an excellent job to accommodate our group. Victor was able to have the crowd laughing without using profanities or sexual gestures and it was a very "clean" and appropriate show. I would definitely recommend Victor J. Hanson for any type of corporate event..." - John Deere