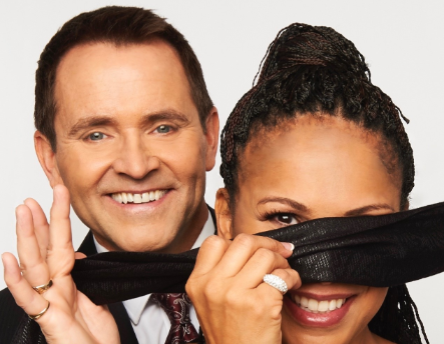 The Evasons have been performing together for over 30 years. They are one of very few married couples in history who have mastered the staggeringly difficult art of two person telepathy. They continue to travel around the globe, sharing the rare and mysterious legacy of Second Sight.

In over 38 countries, The Evasons have appeared on network TV specials,at private parties and special events for diplomats, political leaders and royal families. They’ve entertained troops overseas and headlined on cruise ships and casino showrooms. They have performed at the Comedy and Magic Club in Hermosa Beach, the Great American Comedy Festival at the Johnny Carson Theatre in Nebraska, and the world-famous Magic Castle in Hollywood. And they are the only mentalists in history to be featured performers at an NBA halftime show doing interactive mind reading stunts before a crowd of over 20,000 people!

The Evasons have been honored with some of the top awards in their field.They are the first recipients of The Mentalism Award from the Milbourne Christopher Foundation. They were awarded the highest honor for professionalism by the Psychic Entertainers Association. They are the only mentalists ever to receive the SARMOTI Award which legendary magicians Siegfried & Roy present to their favorite act in Las Vegas. And they were nominated for Stage Entertainers of the Year by the Academy of Magical Arts in Los Angeles. Jeff and Tessa Evason love performing together, creating amazement, laughter, and the serious provocation of thought. They inspire audiences to tap into the power of possibilities. “We’re not trying to change beliefs,” they explain, “only to spark imagination and tickle the beautiful sense of wonder!”