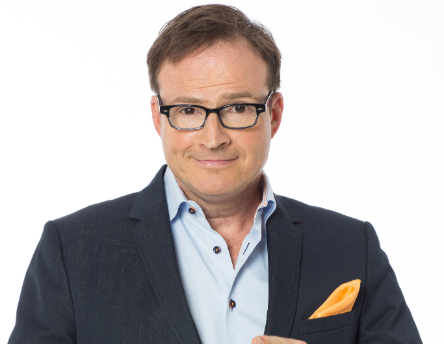 Familiar to hundreds of thousands of Canadians as the host of CBC Radio One’s hit show The Debaters, Steve Patterson’s material combines razor sharp wit and meticulously crafted, up-to-the-moment social commentary, with a measure of musicality thrown in where appropriate.

Patterson has appeared on numerous nationally-televised comedy specials over the past two decades, and twice earned the title “Best Male Stand-up Comedian” at the Canadian Comedy Awards (2011 and 2013).

His work has received considerable praise over the years, but none more poignant than at a Just For Laughs Festival gala when he shared the stage with comedy icon Steve Martin who proclaimed of Patterson, “If I’d known he was going to be THAT good, I would have cancelled him.”

In an effort to continue to prove he is THAT good, Patterson has toured his one-man show called This Is Not Debatable in theatres nationwide and released a comedy recording of the same title in 2014 which earned him another Canadian Comedy Award nomination.

In 2016, he also added author to his credits, with the publication of his first book, The Book of Letters I Didn’t Know Where to Send, and created and co-produced his latest media project, The Smartass-ociates with Steve Patterson, which combines topic-specific experts with top comedians to make smart people funnier and funny people smarter.