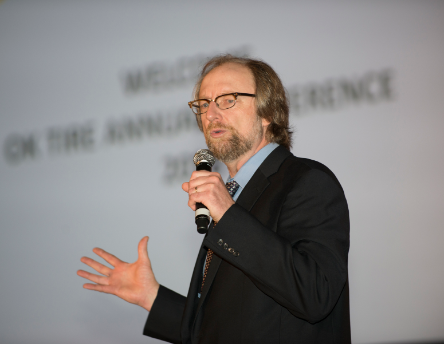 This bilingual native of Eastern has been a stand-up comedian specializing in corporate gatherings for more than 25 years. The Ottawa Citizen has described him as a “sharp and likeable comic who respects an audience’s intelligence.” The Globe and Mail, meanwhile, said he was “wonderfully relaxed.”

His clean and smart comedy has been featured on the national CBC programs, Laugh Out Loud and The Debaters.

He’s also performed across the ocean for Canadian troops stationed in Afghanistan.

An award-winning journalist, Denis’s radio documentaries are still heard across the country on the CBC; he’s also a regular contributor to several national magazines and newspapers, including The Toronto Star. His humour is down-to-earth, but not below-the-belt. Indeed, it’s an act that’s devoid of offensive slurs and weaves its way seamlessly through politics, business, family, farming, education and even his own foibles as an old-timer’s hockey goalie.

Denis and his wife, along with their two sons, currently live on a 50-acre farm near Peterborough where they raise assorted chickens and turkeys.